It’s been 10 days since we launched the Electric Loog Guitar Kickstarter Campaign – and so much has happened since then! 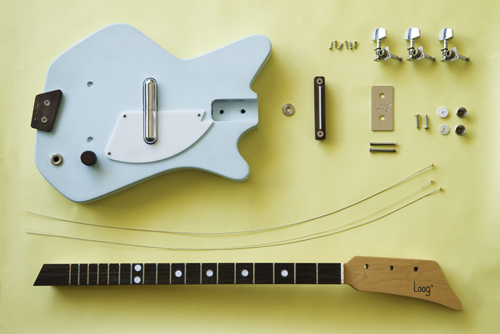 Reception for the Electric Loog remains positive and we love all the comments you guys are sending our way. It’s really awesome when someone takes the time to not only back up your project with actual money, but also leaves a nice comment of encouragement and positive thoughts on the Electric Loog Guitar itself. Thank you SO much!

We’re at 165 backers so far, which pledged for a total of $23,743 – that’s almost half our goal in just ten days! We’re still working hard trying to spread the word and getting people as excited as you guys already are, so thanks for helping out

CAMPAIGN ROUND-UP
We already told you about being on TechCrunch and getting chosen as a Kickstarter staff pick last week, which was awesome. But here’s what went on this week

– We got picked as ‘Project of the Day’ last Saturday – that means the Electric Loog Guitar campaign was right there whenever you opened the Kickstarter home page. That was HUUUUGE.

– Business Bee also chose the Electric Loog as one of 4 Kickstarter products transforming the ordinary into extraordinary – pretty humbling!

– The guys over at Crowdlifted featured the Electric Loog on their site on Monday, in a wonderful piece that also calls the Loog ‘revolutionary’. Shucks, guys *blush*

– We went international! The girls over at BlogCouture wrote a post on the Electric Loog Guitar last Tuesday, which you can read in Spanish.

– Jordan Kushin wrote an awesome feature on the Electric Loog Guitar campaign on Gizmodo that spurred some great discussions amongst commenters (especially referring to the Loog’s three strings).

– We asked Alex Kapranos from Franz Ferdinand what he thought about the Electric Loog Guitar – and he replied! Our squeeing must have been heard from miles around. (He said “It looks cool” by the way.)

This, plus all your help, got us to the 47% funded we’re at today which is, obviously, all kinds of pretty awesome:

THANKS FOR HELPING – PLEASE DON’T STOP!

We know you’ve been the Best. People. Ever. and we really appreciate all your help with sharing the Electric Loog’s Kickstarter campaign with your friends – please don’t stop!

We really, really want to get a chance to turn this little guy into a real line of electric guitars and give even more kids a good chance to learn guitar. By making a guitar that’s less daunting and even more similar to the real thing, we think kids will love the ‘cool’ factor of having their own electric guitar, that actually sounds like the real thing and is even easier and less frustrating to play.

But before that happens, we really need to get to our Kickstarter goal – that’s why we’re so thankful to every single one of you who has pledged or even just mentioned the Electric Loog on Twitter, Facebook, Instagram, tumblr or even among friends. You guys rock even more than the Electric Loog (and that’s a whole lot)!