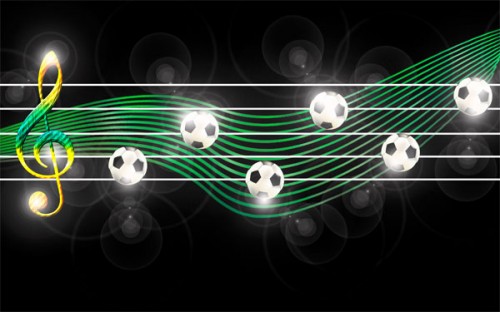 Unless you’ve been living under a rock, chances are that you’re well aware that we’re living in World Cup times. Most of the Loog team has deep, deep roots in a little South American country called Uruguay and, of course, we’re just constantly biting our tongues and making a huge effort to avoid tweeting, posting and talking about the World Cup non-stop. I hope you guys appreciate it

(Although, of course, we’re very much on the same page as John Oliver here.)

In any case, the soccer World Cup and music usually go very much hand in hand. There are the national anthems played for both teams on the pitch before every match. There are several official FIFA World Cup songs produced every four years for each cup. And there’s music being played in every country celebrating a win or honoring a loss. It’s weird when you first think about it but actually very logical once you rationalize it: soccer and music go very much together.

And we’re not the only ones saying it. We’ve managed to collect a huge plethora of articles, pieces and blog posts relating music and the World Cup together and decided to post our favorite here instead of drowning our Twitter feed with World Cup-related madness. So sit up, get ready and bookmark this page. You’re about to get lost in a Wikipedia-esque journey of World Cup music.

1. The Best World Cup Anthems
We found two lists we like a lot. The first -from Sportskeeda.com- is our favorite because it remembered to include “Un Estate Italiana” from the 1990 Italy World Cup. This song is, by far, considered THE World Cup anthem of all time. It’s very 80s, has a bizarre video and is not as up-beat as you’d expect World Cup songs to be. And therein lies its beauty. The most unexpected song for a World Cup:

The second list is from Pitchfork and, of course, includes some of the more obscure and lesser-known World Cup songs. World Cup Song 101 for Hipsters, if you will (and we think there’s nothing wrong with getting a little bit hipster from time to time). The coincidence is that both lists put this little gem from France 1998 at #1, which we wholeheartedly agree with:

2. Every Participating Country’s National Anthem – With a Twist
A country’s national anthem is a great way to first get to know a country and its roots. You’ll see that most South American countries have very similar-sounding national anthems, for instance, because they were all composed at practically the same time. Some African countries also have national anthems that resemble those of the countries that colonialized them. It’s a great minute-long lesson on historical roots and ancestry.

What you don’t usually get is a bunch of pop stars reviewing said national anthems and that is why this piece from The Guardian is so great. You get the experience of listening to soccer players sing their heart outs on the pitch and then laugh at the commentry below. History and humor, two of our favorite things (even if we completely disagree on what David Gray has to say about Uruguay’s):

3. The Five Most Streamed Songs in Each Participating Country
It is a given that most streaming services will produce one of these lists and we’re completely curious if you have any more to share. This one was made by Shazaam and there’s tons to take in. For instance, Pitbull and Jennifer Lopez’s “official” song is not as prominent as the FIFA would undoubtedly like it to be and there’s a whole lot of Enrique Iglesias going on. Plus, it’s always interesting to see how culturally diverse these top 5 lists are in certain countries.

Be warned: you might go into a YouTube video or streaming frenzy after looking at this lists trying to figure out each country’s particular music zeitgeist, but maybe that’s just us

4. How Winning or Losing Affects Music Streaming
This one might be a tad more obvious but Spotify did the science anyway. We’re just not sure if we’re 100% convinced with just two graphs. Seems to us that the Swedes have earlier bedtimes than the Portuguese and that Spotify has a better presence in the Netherlands than in Spain. But maybe they’re on to something and people really do listen to less music when they’re sad. That wouldn’t explain why Adele went so global a couple of years ago, but ok, we’ll give them the benefit of the doubt. What do you think?

5. Sweet, Sweet Sounds from Brazil
Following the Brazilian fan’s discontent with FIFA’s official World Cup song, Condé Nast Traveler was cool enough to conjure this playlist chock-full of Brazilian and Brazilian-inspired music for the world to enjoy. Brazil is a VERY musically-inclined country and it boasts a huge repertoire of awesome artists and bands, as well as genres that they absolutely invented (anyone say Bossa?) Here’s a list to get you started, sprinkled with some crossovers that will make you happy you clicked the link.

Also, you seriously need to check out all of Seu Jorge’s Bowie covers from The Life Aquatic Studio Sessions. Here’s a little taste (you can find another track in the Traveler playlist):