Loog Kickstarter backer Ricky emailed us last week about a new app he created. Called Musical Tiles, the app lets you make ringtones and tiny songs by just pressing on tiles on your iPad. You get four tracks and over 45 instruments to work with… and the Loog is one of them! 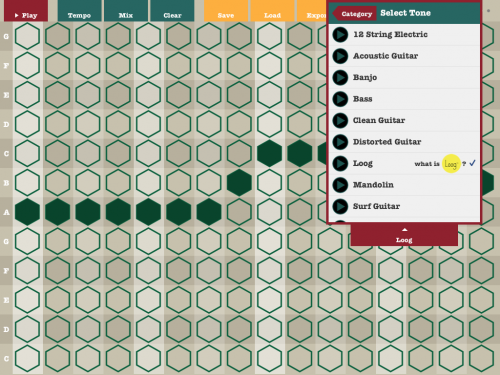 Yup, just tap on the instrument name on the top right, choose Guitars and there it is!

We obviously had to try this. And guess what? It’s actually really fun to play with. We spent hours in the office just tapping down patterns on the tiles and switching instruments to see what they sounded like. Then we played each track in different tempos. Then we played with the mixer settings to get a loop. Then we saw we could actually upload the tracks right onto SoundCloud.

This was our first try, using a drum kit, electronic drums, a double bass and, of course, a Loog:

In just ten minutes we had a loop that didn’t sound that bad. So we decided to go all Philharmonic with the double bass, the Loog, an oboe and a cello:

The fun didn’t end there. One thing we learned is that it’s VERY easy to get too into it and end up with something like this:

That’s the Loog, a dog (which the app says is named Sadie), a baby chicken and a toy piano by the way. We’re also sorry we made you listen to that – deep down, we’re still six year-olds ourselves

Jokes aside, we did get some pretty pro loops from just playing around and would definitely recommend it to anyone who likes making music. It’s also awesome to see how the separate sounds start to blend into a melody and all our kids loved it beyond the funny pig sounds you can play. So if you’re into having a fun time and creating music, either watch Musical Tiles in action on Ricky’s website or download the app from iTunes.

And thanks Ricky! We LOVED the app and it’s a huge honor to have the Loog included