Want a Smart Kid? Give Them a Guitar

The following is a translated excerpt of a piece we found in El País, Spain’s #1 newspaper. You can find the entire piece in its original language right over here. It’s nothing exceptionally new and it reinforces much of what we already say in our Your Kids’ Brain on Music infographic – but it does throw new light on how powerful learning to play music can be, especially at a younger age than we assumed. 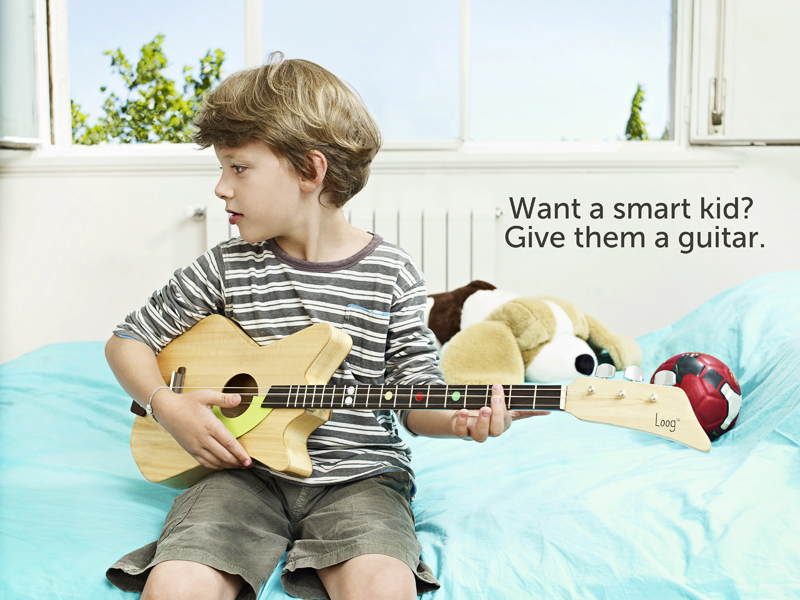 Music classes boost intelligence levels in kids – unlike technology, which only helps out with certain qualities

Babies are born with practically all of the 86 billion neurons that they’ll have during adulthood. The main difference between their and older people’s brains is that our neurons will already have developed trillions of connections amongst themselves. Each one of these connections can translate into something the kid’s brain has learned. The first six years of kids’ lives are very important – that’s the age in which kids start to lose part of these connections, the ones he or she uses the least.

So knowing this, what can us parents do? Our everyday lives offer a lot of things to do to stimulate our little ones’ brains – and while many of these have built a very good rep, some aren’t really all that useful. Let’s go through them:

Signing them up for artistic activities: Go for music instead of theatre
Much research has been made showing a correlation between cognitive development and learning music (not just listening to it). A study from the University of Toronto published in Psychological Science compared four groups of six year-olds. One group learned how to play the piano for an entire year; the other one studied singing; the other one theatre arts; the last group did absolutely nothing apart from attending regular school. All kids took intelligence tests before and after the year was up. Intelligence levels went way more up in both groups studying music-related fields. Those studying theatre also improved at the end of the year, but mostly in behavior and social adaptation instead of cognitive development. The group doing no extracurricular arts classes showed the least increase in intelligence according to the tests.

Tech devices: only for kids 3 years old and up
“This kid sure is smart! So young and look at how she uses a tablet or cellphone!” Grandparents and aunts and uncles say this often. But a study from the University of Boston, published in Pediatrics magazine, shows that frequent use of these types of devices by kids between the ages of one and three can affect not only their brains but also their social development and emotional abilities. Smartphones and tablets generate stiumli that are so fast and intense, that tiny kids’ brains can’t handle them all that well. “Technology will never improve one’s basic intelligent capabilities. It can help out and drive certain qualities, but it will never improve the underlining pattern”.

So, what do you think? Let us know in the comments!