A Monkey, a Boat and a Loog Guitar 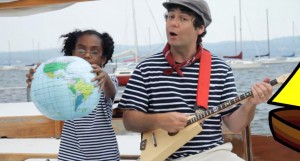 We got something in the mail we’re super excited to share with you! Barry G, member of the Dream Jam Kids, will be soon releasing Huh-uh, his first solo album, on myKaZoo Music/Universal.

He recently sent a video of one of his songs and guess what? There’s a Loog in it! Check out Barry G’s Captain Was a Monkey (with a Loog!) below:

Huh-uh was produced by award-winning songwriter and producer Rick Chertoff (Cyndi Lauper, Joan Osborne, Ron Howard’s How the Grinch Stole Christmas). As they wrote the songs for Huh-uh, Chertoff and Barry G found inspiration from work songs, sea shanties, traditional folk and blues songs and field recordings that date back to the 1930s. The addition of the Dream Jam Kids’ voices invite listeners to sing along. “It was natural for us to invite some of our young fans to come and sing with us on the album. I am so excited to give children the chance to experience these timeless melodies in a way that is accessible and fun,” he says.

We might only be kids-at-heart but we loved the song and we’re thinking it’s going to go over well with young Loog players too – plus, everyone loves a good monkey :-).

Thanks Barry G and best of luck on your upcoming release!