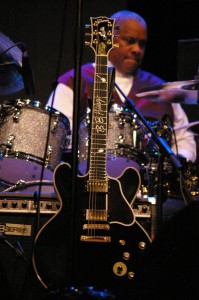 I’ve often wondered how one goes about naming a guitar. I’ve heard many people say that guitar names should always be female and be reminiscent to women who’ve done the guitarist wrong. Then again, I do have a friend who named his Hammertime and then kept telling people they couldn’t touch it.

Others think naming guitars is silly while most naming purists think that it actually makes them play better. I’m going to have to go with the latter.

We’re always going on and on about how building or assembling a Loog with your kid creates a greater bond with the actual guitar. Naming it does the same. I remember naming my first guitar, an unbranded acoustic, Fabiola. I just liked the name and it stuck. Poor Fabiola has seen better days but I still think of her fondly. Her. See what I did there? I just turned into one of those people who personalize inanimate objects. With guitars and cars I don’t seem to mind, though.

Have you named any of your guitars? Or better yet, have you named your Loog? I’m embarrassed to say I still need to name mine… any ideas? (And no, this post wasn’t entirely an excuse to get cool names for my Loog. I promise.)