CYBER MONDAY SALE ONLY TODAY! UP TO 40% OFF & FREE SHIPPING

You might know we were in Nashville for Summer NAMM a few weekends ago, but what you maybe didn’t know is that we took the time to drop by a place we were DYING to see: Third Man Records. We’re huge fans of Jack White here at Loog Guitars (Whitievers? Jack Whiteneers?) and couldn’t resist being so close to his record label and not, you know, drop by and squee at everything we saw. So we did just that. 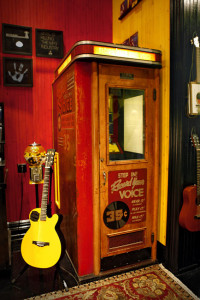 The place is amazing, and it’s all the internet promised us it would be. But the best part -or one of our favorite parts at least- is the refurbished 1947 recording booth they have set up within the tiny shop. How it works is: you go inside, record whatever you want for two minutes and get a one-of-a-kind 6″ phonograph disc with whatever you recorded for posterity. Some people have even gone further and, like Neil Young, have used the booth to record entire albums.

So of course we dragged an Electric Loog Guitar on the trip with us and had Dinamita play in the same place where Neil Young and Jack White have been.

The end result is this little video and a huge dream of ours come true: